Available throughout the Mediterranean region, the yacht offers an authentic nautical atmosphere, combining classic splendour with 21st-century standards of comfort. Iduna is a classified yacht d’époque and can also be chartered during the classic regattas.

Originally launched in 1939 by Royal De Vries, Iduna remained the largest Feadship built until 1960. Her three-year rebuild was carried out in the purpose-built Classic Yacht Darsena yard in Italy. This is the same multinational team that was responsible for the stunning restoration of the 1920 gaff cutter Lulworth.
Iduna's interior echoes the golden age of yachting, combining mahogany and teak with subtle fabrics and enormous attention to detail. Modern conveniences such as air-conditioning and an audiovisual entertainment system are subtly incorporated. The owner’s stateroom is the height of sophistication, with a Queen-size bed and ensuite bathroom. Other accommodation includes an ensuite guest double, an ensuite guest twin and two large cabins for four crew members.
There are two spacious lounges, one on the lower deck and another in the wheelhouse. Iduna’s extensive deck spaces offer exceptional options for al fresco dining and entertainment, and the yacht has a good selection of water sports toys.

Iduna was built by De Vries yard in Aalsmeer and designed by Henri de Voogt - both founder members of Feadship in 1949, which would become the number one builders of luxury yachts in the world.

In addition to having good taste, Van Ommeren's choice of Holland’s most famous naval architect was made easy because he was married to Henri de Voogt's aunt Wilhelmina. Having built many great racing boats during the 1920s, De Voogt earned global fame designing yachts for royalty, including Ramsar for the Shah of Persia and Piet Hein for the future Dutch queen Juliana. Ramsar was also built by De Vries, which went on to build many of the world's most famous superyachts.

World War II meant Van Ommeren only had a few weeks sailing on Iduna. With Holland under German occupation, the boat was moored in Warmond and gave refuge to four Dutch ladies during the freezing cold hunger winter of 1944-1945. After Van Ommeren passed away in 1945, the De Voogt family sailed Iduna for several years. Frits de Voogt, son of Henri de Voogt and one of the leaders of the Feadship organisation until his retirement in 1993, kept the logbook from these years and handed it over to Iduna's owner half a century later.

For most of the next five decades, she was a treasured boat loved by a series of multinational owners.

In 1949, Iduna was sold to a Portuguese nobleman. His two-decade stewardship included changing her from a gaff ketch to a Bermudian ketch during a refit in 1960 at De Vries.

In 1970, the boat was sold to a consortium of owners in England. The following owners were an Italian family (1975), the Roche family from Switzerland (1977) and a commissioner from the Sûreté National (1983). In 1987 Iduna was bought by an Englishmen who renamed her Highland Prince (after his whisky company). Only when Iduna was brought by another owner to Antibes in 1995 did she begin her slide into disrepair. Just as it looked as if she was destined for the scrap yard, a man from Holland came to the rescue.

In the summer of 1999, an adventurous Dutchman with a love of history agreed to buy and take on the restoration of this piece of nautical history. Johan J.M. van den Bruele had only owned motoryachts previously and agreed to purchase Iduna so long as the Longo's would lead the restoration project. Thus began a partnership that would not only lead to the rebuild of Iduna but also the world's largest gaff cutter Lulworth.

Opening the purpose-built Classic Yacht Darsena yard in Viareggio, dedicated craftsmen from the UK, US, South Africa, Australia, Poland and elsewhere joined the team in Italy to start Iduna's restoration. It would require far more effort, time and money than anyone had foreseen 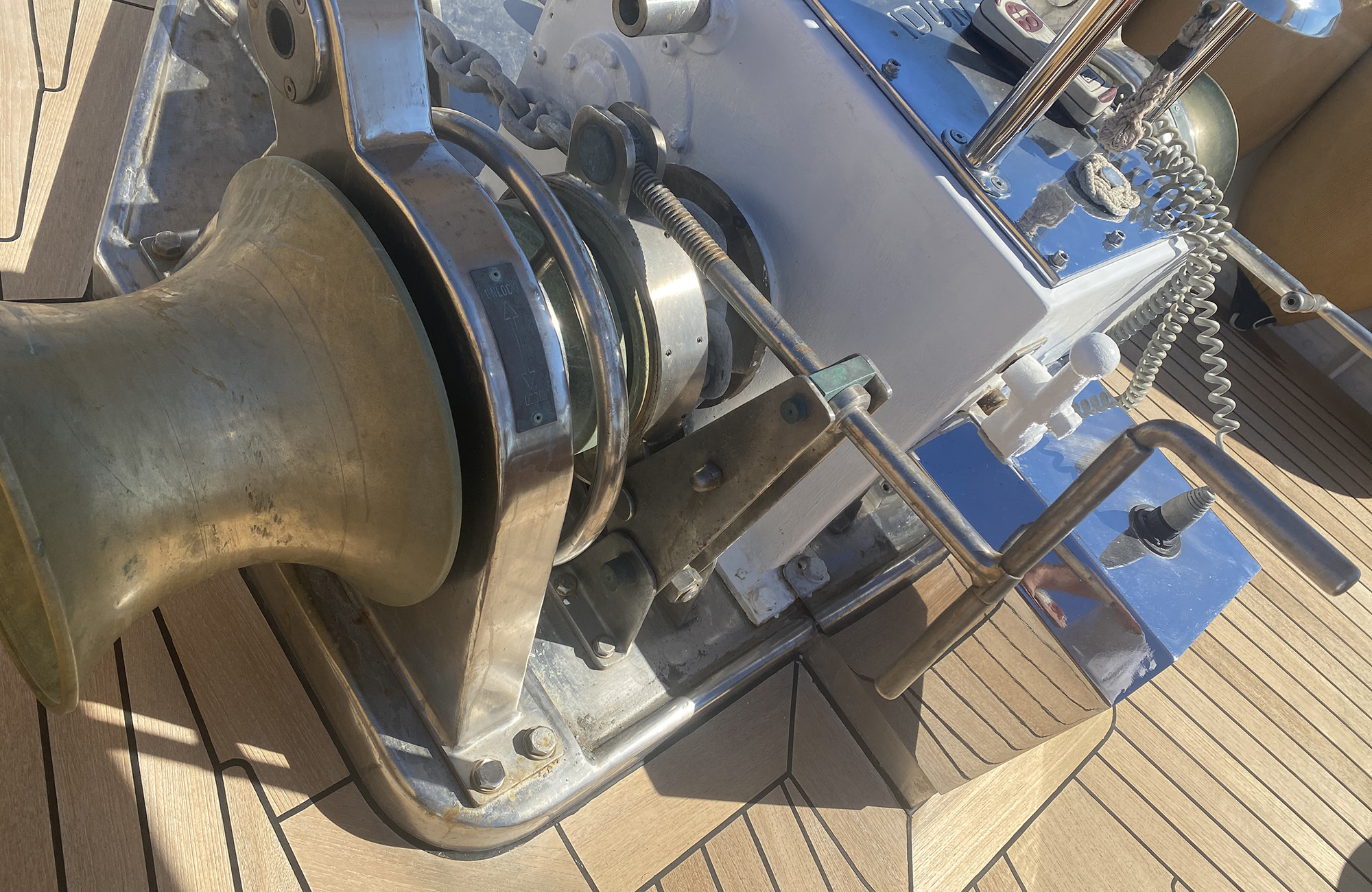 BUILD (In regards to size, layout and features, why was she built that way?

What is the model name? What type of yacht is she, e.g. ‘tri-deck motor yacht’, ‘performance/world cruiser’?):

The motorsailer Iduna at 30.48m - the largest pre-war yacht built at De Vries was launched in June 1939. She followed hard on the heels of the equally impressive 28.80m motoryacht Sultan, delivered to the Dutch East Indies in March. These projects completed a remarkable decade for the De Vries family, as since the 1930s, building in steel hull had become second nature.

In the summer of 1999, an adventurous Dutchman with a love of history agreed to buy and take on the restoration of this piece of nautical history. He agreed to purchase Iduna so long as the Longo's would lead the restoration project. Thus began a partnership that would not only lead to the rebuild of Iduna but also the world's largest gaff cutter Lulworth.

Opening the purpose-built Classic Yacht Darsena yard in Viareggio, dedicated craftsmen from the UK, US, South Africa, Australia, Poland and elsewhere joined the team in Italy to start Iduna's restoration. It would require far more effort, time and money than anyone had foreseen.

From refit to rebuild

Iduna was sailed from France to the Italian port of Viareggio in September 1999. The skeleton crew onboard only found out later how close they came to disaster. During her 24-hour voyage, the boat had been sailing on a hull virtually no thicker than a film of paint such was the damage below the leaking portholes.

This was one of many setbacks that confronted the newly formed team as it became clear that Iduna required much more than a refit... She needed a complete rebuild. The initial expectation had been that the project would involve new decks, an upgraded interior and a fresh paint job. However, features such as the teak decks were found to be beyond repair and half the plating for the steel hull needed replacing.

The owner was later asked if he realised how much work was going to be involved. "Certainly not," he replied. "I thought we were talking about new decks, an upgraded interior and a fresh paint job but there was much more to do than that. In essence, we went from a refit to rebuilding the entire boat. This wasn't a sudden decision: As the boat was being dismantled, there was a time when I considered simply selling off what could be sold and scraping the rest. But the team was so motivated I didn't have the heart to pull the plug."

And thus began one of the most dedicated great yacht rebuilds of our time.

As you walk across the passerelle and step onto Iduna's stern, you'll be immediately impressed by the sexy sheer of her long flat deck. The expansive teak planking curves forward in a distinctive style and shape that exudes 'classic'. The materials add to the ambience - the nickel, aluminium bronze, stainless steel, leather, varnished wood and sails all have a singular look and feel.

You may also feel yourself drifting back in time as you remember that others have stood on this deck before, facing up to the elements and relishing every rain-soaked moment of it. The fact that so many original features have been preserved and restored helps make Iduna so historically compelling.

The deck is uncannily close to the way she looked back in 1939. Original features include the main mast, skylights, deck saloon, compass, anchor winch and steering wheel. Iduna’s teak deck was laid in the traditional way with a planking pattern that follows the old to the millimetre. All replica fittings have a traditional bronze look, designed and cast to look completely authentic.

From the helm you can oversee the rigging (made by Harry Spencer of Cowes) and classically coloured Ratsey & Lapthorne sails. With its fold-down captain's seat and ample space for others to enjoy the panoramic views, the helm is a very popular spot. There is even a niche built into the dashboard to hold your drink and cigar!

Walking down the staircase from Iduna's deckhouse is like stepping back in time to the golden age of yachting. Although the entire interior is brand new, the rebuild brief was to create the appearance of a boat that had been immaculately kept for 65 years. And boy did they succeed. All the materials chosen have a vintage look, including even panels with the odd knot or tasteful scratch.

The decorative scheme matches the authentic mood. Restrained furniture fabrics and understated cream carpeting create an air of calm, leaving supplementary features such as the cushions and artwork to introduce brightness and colour. The attention to detail is extraordinary: From the door handles and hinges to the porthole basins and lighting, design and function are in total harmony.

Cherrywood is used to great effect throughout the interior, which includes an owner's stateroom, guest double with ensuite bathroom, an ensuite guest twin, plus two large cabins for four crew members with a spacious bathroom, galley and crew mess. There is also a lovely lounge area, which offers another place for fine dining in addition to the deckhouse.

Quality in all things, with all new machinery being of the highest calibre. The finest equipment has been installed in the technical spaces and galley alike.

Modern conveniences to ensure comfort, while never being obtrusive on the classic atmosphere. You can easily plug in a laptop on Iduna… If you know where to find the plug!

The De Vries yard provided the original plans and specifications, plus a wealth of photographs that helped ensure Iduna's refit was as authentic as possible. And experts from around the world were called in to meet the exacting brief...